St. John School has a tradition of almost 120 years of quality Catholic education. In September of 1885, St. Mary School opened on Acushnet Avenue and Wing Street to educate the children of the Catholic families living in the south end of New Bedford.

Starting with only grades one and two, the school quickly grew to full capacity. Although long associated with St. James Parish, the school retained its original name until 1964 when it became known as St. James School.

In 1941, the parish of St. John the Baptist, seeing the need to educate the children of its primarily Portuguese congregation, opened a school known as St. John’s Academy in the former Grinnell Mansion on County Street.

In 1957, a new school, now called St.John the Baptist School was built on the rear of the Grinnell property, facing Orchard Street. Although both schools flourished for many years, in the mid 1970s, dwindling enrollment and the need for more lay faculty to replace the Sisters of Mercy who had staffed both schools, led to the merger of the two schools.

In September of 1973, the school officially became known as St. James–St. John School. At the beginning, the school was housed in the former St. James building on Acushnet Avenue, then moved to its present location at 180 Orchard Street in January of 1986.

The School has grown from its original four classrooms for students in grades one and two, to eleven classes of students from preschool to grade eight. In addition to the fundamentals of reading, math,  religion, social studies, science and computer classes, we offer classes in art, music, Spanish, and physical education. Although the Sisters of Mercy no longer staff the school, the Mercy tradition of quality Catholic education with a caring and nurturing environment is still carried on by the dedicated, knowledgeable and caring lay faculty. 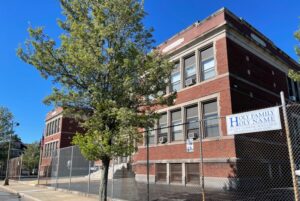 Holy Family – Holy Name School was established in 1973 as a result of the merger of Holy Name School, owned by Holy Name Parish, and Holy Family School, owned by St. Lawrence Martyr Parish. At a time when many parish school were closing, merger was seen as a way of insuring the availability of Catholic education for the parish communities in the future. From the time of the merger until 1976, the school functioned out of the two buildings which had originally been the individual parish school. Primary grades were housed at the former Holy Name site and grades five through eight were housed in a set of buildings adjacent to St. Lawrence Church. These buildings also housed Holy Family High School – a separate entity from the elementary school, yet associated with the former Holy Name School and the pre Holy Family-Holy Name by proximity and name.

Through negotiations in 1976 with office of Housing and Urban Development, St. Lawrence Church purchased the building formerly housing Carney Academy / Cooke School – part of the New Bedford  Public School System. This building was located across the street from the merged school and was in much better physical condition than the buildings being used at that time. Holy Family – Holy Name School and part of Holy Family High School were moved to this new facility – the former Holy Name School was sold to Kinyon Campbell (by Holy Name) and one building in disrepair was razed and replaced by parking for St. Lawrence Parish.