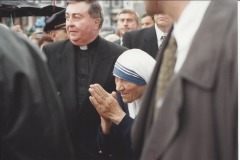 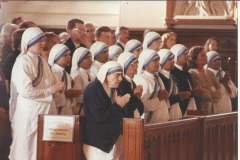 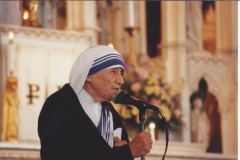 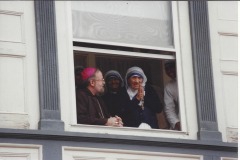 June 14, 1995 will forever remain in the hearts and memories for those living in and around New Bedford as this was the day that Mother Teresa, now Saint Teresa of Calcutta, arrived into New Bedford.  The purpose of her visit was a result of an invitation from then Bishop Sean O’Malley, OFM Cap. to establish a convent and begin ministering to the people of New Bedford.

A Mass was celebrated at the St. Lawrence of Martyr Church which is located across the street from the Missionaries of Charity convent.  The church was completely full and the Mass was also heard outside via speakers by those unable to secure a seat.  After the Mass, Mother Teresa addressed the congregation for about 20 minutes at which time she received a standing ovation.

After Mass, Mother Teresa was brought to the Missionaries of Charity convent where she remained very visible to the surrounding crowd through a window from the building’s second floor.  People remained vigilant near the convent for the rest of the day in anticipation of additional viewings.

Her humility and love for the most underserved populations shone through that day and the city of New Bedford will be forever blessed to have had Saint Mother Teresa grace us with her presence.

*Images used with permission by the Diocese of Fall River